For the inaugural Couture Monday post, I'll be looking at Armani's fall 2007 blush and fall 2008 palette, both of which feature animal prints.  The Fall 2007 palette has the pattern on the outside of the case, while the fall 2008 one moves the print inside the palette.

Fall 2007 Leather collection blush (there was also an eye shadow palette with the same print on the case): 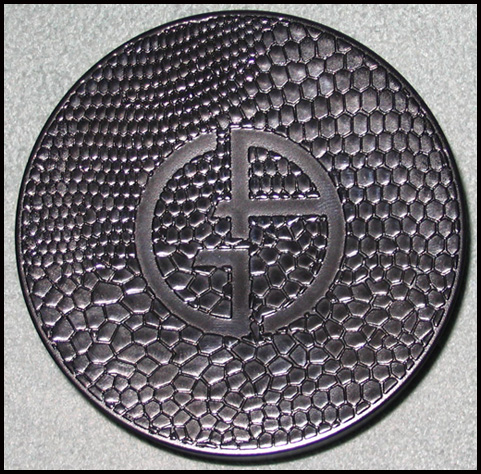 The blush inside: (with flash on left; in natural light on right) Let's first examine the fall 2007 blush.  The copy for this item at the Armani website read "Outfitted in a unique black faux-crocodile skin packaging, the tender peach-pink hue is a one-of-a-kind addition to any fall wardrobe."  The trouble with this is that the print is identical to the eye palette, the copy for which read, "Drawing inspiration from Armani's exquisite collection of leather accessories, the eye mania palette features four versatile shades encased in a luxurious black snakeskin print compact."  So the blush is apparently crocodile and the eye shadow is snakeskin, but they're exactly the same!

Now, let's just say the blush really is a crocodile print.  Armani's fall 2007 ready-to-wear line did feature some croc pieces, or at least ones made of leather embossed to look like croc: 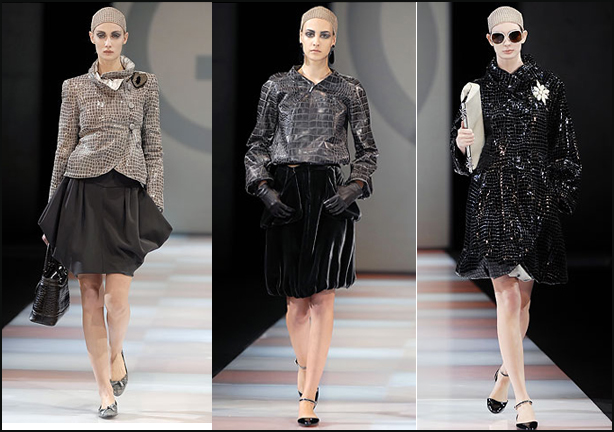 Additionally, Armani stated that he was inspired by David Bowie and rock music1 for his privé line that season, hence the prominence of fedoras and fingerless gloves: 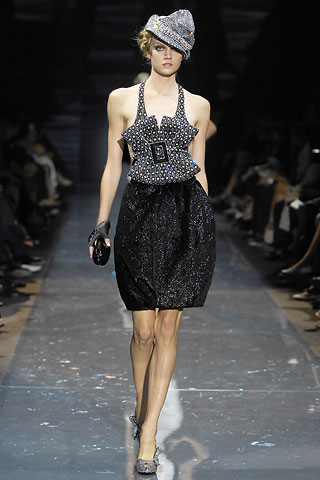 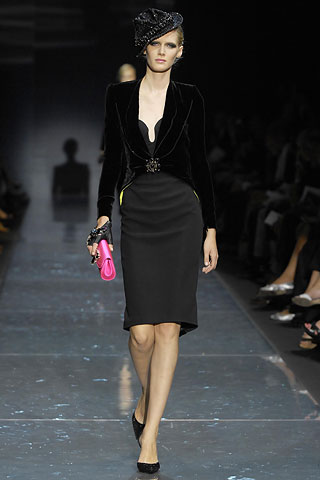 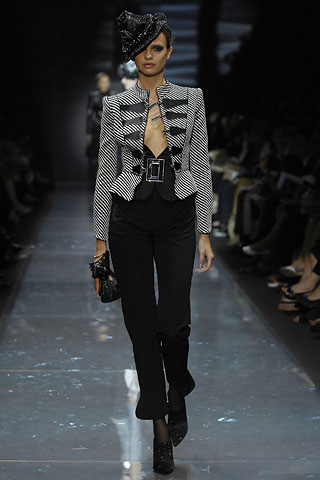 And lo and behold, the model for the Leather collection is wearing a fedora, along with leather gloves (albeit not fingerless ones):

I think Armani did a splendid job in coordinating the fall makeup line with the fall clothing collections. Even though there is some conflation of crocodile vs. snakeskin, the overall themes, the use of leather and hats as well as a rock n' roll type feel in both makeup and clothing is harmonious and inspired.

Now let's turn to the the fall 2008 python palette. At first glance it expresses the themes of the fall ready-to-wear collection, at least colorwise.  Black, white and grey/silver dominated the ready-to-wear line,  as evidenced in these photos from the runway: This model is carrying what looks to be a python bag. Take a look at the models' eye makeup too - it's a very dark, smoky greyish black, which is the look the python portion of the palette is meant to create.
The privé line continues with the color scheme and also features a shiny python jacket: 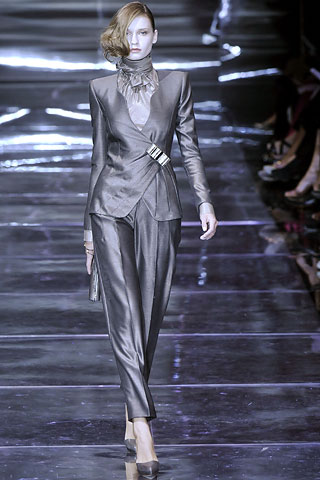 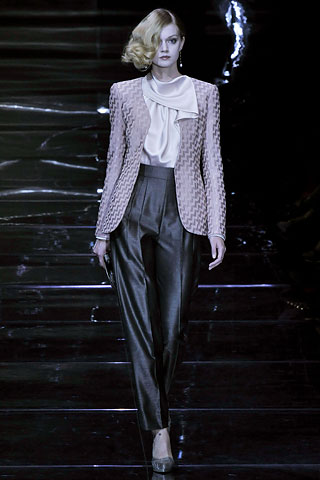 (all runway photos from style.com)

However, Armani described his ready-to-wear look as "free-spirited"2, which doesn't quite match the palette - when I see python print, I think sophisticated and drop-dead sexy, while "free-spirited" brings to my mind a more playful, carefree style.  The privé line contained a python jacket and some dresses but the majority of the looks were pantsuits, which don't exactly correlate to the sultriness  and glamour of snakeskin (although the suits do convey a sense of power.)  Also, if you look at the fall 2007 ready-to-wear line in its entirety, the exact same color palette is there, right down to the model's makeup.  Thus it seems as though this season Armani recycled last fall's makeup collection, without consideration of style of the clothes that were sent down the runway.  The choice of snakeskin print for the palette really doesn't go with the feel of either the couture or ready-to-wear lines; there is no unifying theme between makeup and fashion.  While a couture brand does not necessarily have to link the two, the makeup is an extension of the clothing, so for big seasonal releases it would make sense to have them go together.

Posted at 08:11 AM in Armani, Couture/Fashion | Permalink | 0 comments